Skip to content
25Jul 2022 by Damian Thomas No Comments 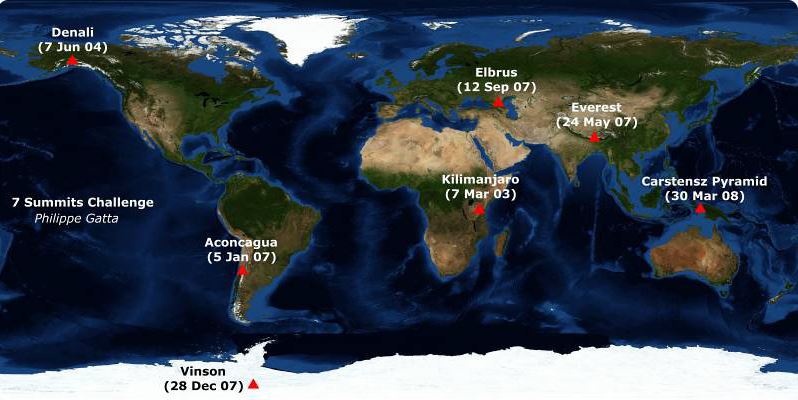 The highest mountain peaks of each of the seven continents of the world are known as the Seven Summits. Reaching the peaks of these mountains is regarded as a mountaineering challenge and this feat was first achieved by Richard Bass on April 30, 1985. The seven summits include each of the highest mountains in each of the continents although different lists have slight variations among them usually the same core is maintained. The lists of the seven summits vary slightly depending on the definition of a continent, particularly where the border of the continent is.

The two main points of variation are Mont Blanc and Mount Elbrus for the European continent and the second one depends on whether one considers the whole of Oceania as a continent or only mainland Australia and leads either Mount Kosciuszko or Puncak Jaya making it to the list. This creates a bit of confusion regarding the different versions of the Seven Summits leading a lot of mountaineers to complete all 9 peaks.

The popular ‘Bass Version’ created by Bass and his climbing partner Frank Wells was to be the first person to stand on top of the tallest mountain peaks in each of the continents. They climbed Mount Aconcagua in South America, Everest in Asia, Denali in North America, Mount Elbrus for Europe, Kilimanjaro in Africa, Vinson in Antarctica, and finally Kosciuszko in Australia.

THE BASS AND MESSNER LISTS

The first list of the seven summits was given by Bass and is known as the Bass or Kosciusko List. In this list, Bass chose the highest mountain in Mainland Australia Mount Kosciusko (2228 m) to represent the highest peak in Australia. Reinhold Messner created another list known as the Messner or Carstensz List where he replaced Mount Kosciusko with Puncak Jaya of Indonesia also known as the Carstensz Pyramid (4884 m). Neither of the lists by Bass or Messner includes Mont Blanc and from a mountaineering perspective, the Messner list is deemed to be more challenging. The ascent of Mount Kosciusko is one easy hike whereas climbing Carstensz Pyramid is quite a challenging expedition.

It is considered to be a great mountaineering feat to climb the Seven Summits of the world. This challenge is traditionally based on either the Bass or Messner lists. It is also generally assumed that any mountaineer who has completed the Seven Summits would have also climbed Mount Blanc. Approximately 275 climbers have climbed all the Seven Summits from either the Bass or the Messner list as of January 2010. And 30% of them have climbed the eighth peak which is required to complete this challenge. It is quite safe to say that is not a challenge for amateur climbers or climbers who are out of practice for a long time.

The oldest person to have competed in all the Seven Summits in the Carstensz List is Takao Arayama of Japan who was 74 years and 138 days old when he completed this challenge. The oldest person who completed the Seven Summits challenge in the Kosciusko List is Ramon Blanco of Spain aged 70 years and 243 days at the time of summiting. The shortest duration to climb all the seven peaks in both lists was Ian McKeever who took 167 days to complete the Kosciusko List and 156 days to complete the Carstensz List.

Author John Krakauer in his book Into Thin Air said that it would be a much bigger challenge to climb the second highest peaks of the seven continents. This challenge, also known as the Seven Second Summits was not completed by anyone until January 2012. This is especially true for the second highest peak in Asia which is the K2 (8611m) and It demands much greater technical skills that climbing Mount Everest.